The Luz en Casa programme arrived in the Ngäbe-Buglé indigenous region more than 1 year ago, with the aim of bringing electrification solutions to the rural communities of that region, which is the least developed and has the lowest rate of access to services in Panama. Today, it offers a sustainable, affordable solution of access to electricity service to 2,270 people, who are benefited from the pilot project implemented during 2018 in 400 households, and it is extending its scope to 850 additional families with the on-going project called Luz en Casa Ngäbe-Buglé 2019.

These days acciona.org starts a new phase of supply within this project to provide, during the next weeks, 500 households with access to a basic electricity service through third generation solar home systems, whose maintenance is covered with an affordable contribution from the users. Systems offer, daily, more than 6 hours of electric light, charge of a mobile phone and about 2 hours of compatible electric device operation (TV, radio, Tablet). This performance allows users increasing and making easier their activities, like Faustina –user of Luz en Casa in the Ngäbe-Buglé region since 1 year ago– explains: “I make handicrafts and I also teach my children. In the evening, I cook and then we can have dinner all together.”

The mentioned services are managed through a Centro Luz en Casa, a micro business franchised to a local entrepreneur with an existing shop in a reference location for the attended communities, who adds to his/her job this new activity of systems repair and advice, as well as electricity service management. Within the on-going project, a new centre is going to open in the locality of Llano Majagua to attend to the users of its surroundings, as the Chichica centre already does. Efraín, owner of this centre, explains his satisfaction from attending the poorest population of the area: “Many people come and say feeling happy because now they can work in the evening, their children can study, the women can sew in the evening…” 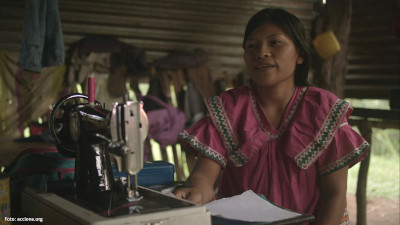 In the performance of these activities, we rely on the Spanish Agency for International Development Cooperation (AECID) as our counterpart in a public-private partnership for development. AECID contributes with co-funding, as well as with an extensive knowledge of the Ngäbe-Buglé region and the Panamanian setting due to its work in the area with access-to-drinking-water projects since several years ago. This partnership generates synergies that make possible to achieve the highest impact in actions focused on people development, as well as the collaboration with other affected entities, such as the Ngäbe-Buglé Indigenous Council, to which the project is presented and which is a support to have access to the communities, or the Rural Electrification Office –a body belonging to the Ministry of the Presidency of Panama with the mission of promoting and developing the electrification in underserved and not-concession-granted rural areas– with which coordinating the actions.

acciona.org and the Sustainable Development Goals

The access to the Luz en Casa Ngäbe-Buglé’s basic electricity service impacts positively on the economy, society and environment of the beneficiaries of this action, which is aligned with the 17 Sustainable Development Goals (SDG) included in the United Nations’ 2030 Agenda.

At acciona.org we work to bring access to energy, water and sanitation to very low-income people who live not being included in any plan of extension of those service, for which we apply technological and managerial innovation criteria. Thus, we contribute to achieve the SDG directly related SDG6 on water & sanitation, SDG7 on sustainable & affordable energy, and SDG9 on resilient infrastructures and promotion of innovation. That contribution is part of the ACCIONA commitment to the SDG’s.

We also favour the achievement of other SDG’s through the positive impacts of its activity resulting in reduction of poverty, improvement of health, education, equality, work, etc., as well as through the collaborative view with which we execute our actions, such as the public-private partnership for development that carries out Luz en Casa Ngäbe-Buglé.